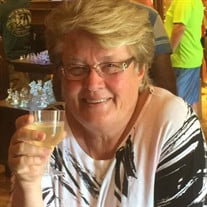 Gay was born on January 27, 1950 to Cleo Jerome and Alva Janet Clauson. Gay was the middle child of three: Sandy (Stanton) Smaagaard (Dawson, MN) and Jon (Brenda) Clauson (Montevideo, MN). She attended Montevideo High School where she enjoyed participating in marching band, Friday night lights with her friends, and the occasional flickering of the front porch lights when she was breaking curfew. Gay met her first love, David Allen Larson (Watson, MN), in high school. They married and moved to Crookston, MN to start their lives together. She began her career as a secretary at a local high school while David worked towards a degree in horticulture with the hopes of a future of owning their own business. Moving to Warren, MN after receiving his horticulture degree, their first born, Amy Jean Larson, was born on May 31, 1973. Their dream of owning their own business came true when they purchased “Blossom Town'' in Redwood Falls, MN where they began their legacy together. Gay’s business mindset and creative passion, along with David’s horticulture expertise and their customer service, built a business like no other. With the hustle and bustle of owning a flower shop and green house, David and Gay gave birth to their second daughter, Wendy Lynn Larson, on April 2, 1976. Blossom Town grew to become a family that will forever live on in the hearts of many. The true love that was shared between Gay and David was shattered when cancer took David’s life at the young age of 41. With the love and support from family and friends, Gay found the strength to continue to lead Blossom Town as the best blooming place in town.

Believing that God had other plans for her, Gay then found peace with selling Blossom Town and began a new life as a bank teller at two of the local banks in Redwood Falls. One would think that finding the love of your life once is enough, but Gay won the lottery when David Dale Septon stepped back into her life. Yes, both of her husband’s names were David, coincidence you may think? Oh, and yes, they ALL went to high school together! God’s plan may raise an eyebrow and yet, it all makes perfect sense now. Gay and David were married November 28, 1992 and began their life together in Wuhan, China. David’s job through General Electric partnered with the contracts through the United States Air Force, allowed them to live and travel the world together. Get your passports ready! While living overseas (Wuhan, Beijing, and Poland), David and Gay raised a glass (or two) while taking in the sites in Thailand, Bali, Spain, France, and Australia (just to mention a few stops). David and Gay had the opportunity to come “back home” to the states and lived in Oklahoma with their final stop being in Jacksonville, FL. While living in Florida, Gay worked and eventually retired as a bank teller at Regions, volunteered at the Jacksonville King Fish Tournament, and was an active member of the North Florida Corvette Association. Gay juggled and wore many hats: florist, world traveler, successful businesswoman, and active community member. Her passions were knitting, reading, and baking - a favorite of many. Gay cherished her time with her family and friends, and she will truly be missed by us all. When you raise a glass today, tonight, or tomorrow, take the time to cry, smile, laugh, and reminisce. Gay will be with you.

Gay is survived and will be greatly missed by her husband, David, daughters, Amy (Jim) and Wendy (Alex), grandchildren, Cody, Hanna, Megan, Sara, Nick, Gabrielle, and Genessa, great grandchildren, Shawn and Sam, siblings, Sandy (Stanton) and Jon (Brenda), nieces, nephews, and the many, many, many friends that she came to love while wearing the many hats listed above.

Gay was preceded in death by both of her parents (Cleo and Alva) and her first husband, David Allen Larson along with his parents, and her step-son, Shawn Septon.

In lieu of flowers, Gay’s family asks that you make a donation to the Jacksonville Ronald McDonald House in her name.
To order memorial trees or send flowers to the family in memory of Gay Jean Septon, please visit our flower store.