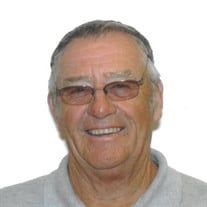 Arrangements are with Nelson-Hillestad Funeral and Cremation Services of Morgan and Redwood Falls. E-mail condolences may be sent via www.nelson-hillestad.com .

Galen Elmer Engholm was born to Elmer and Florence (Kopischke) Engholm in New Ulm on April 21, 1942. Galen grew up on the family farm west of Evan, attending school in Evan and graduating from Morgan Public High School in 1960. On November 25, 1961, Galen married the love of his life, Gloria Stark at the Morgan Methodist Church. They began their life together in Evan, then after 7 and a half years they moved to an uncle’s place near the river bottom. After 7 and a half years they moved to the family farm and lived there for the next 40 years before moving into Morgan.

Galen was an active member of St. Matthews Lutheran Church of Evan. He enjoyed photography and remote-control airplanes. He was a member of the Flying Wingnuts, where he helped create and develop the “Evan International Airport” for the club. He helped with the Annual Fly-Ins at the airport, they would come from all over Minnesota to fly their remote-control planes. Galen was also a charter member of the Morgan Community Players. He was in all 32 plays and cherished his copies of each play. Galen was a natural born leader, as he was a proud past president of the Morgan Lions Club. He was a huge supporter of the community and always up for an adventure.

Blessed be his memory.
To order memorial trees or send flowers to the family in memory of Galen E. Engholm, please visit our flower store.