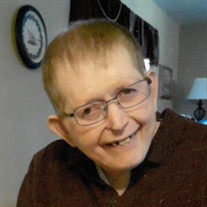 Frank Clark Burchett, the son of Victor and Bernadine (Morrell) Burchett, was born December 8, 1946 in Leon, Decatur County, Iowa. He moved with his parents from Iowa to Redwood Falls at 6 months of age and attended grade school in Redwood Falls. Frank continued to live with his parents until he became a consumer under REM services. Frank was one of the first participants of the Redwood County DAC in 1969. He worked at the DAC (later SEI) until his retirement. In the 1980’s Frank got a job recycling at a Seaforth Salvage Yard pulling copper out of engines and loved it. In his later years he attended SEI for their day activities. He will be remembered for his sense of humor, love of music, particularly his singing of church hymns and country music like Patsy Cline and The Lennon Sisters. Frank was very musical and knew all the words to the old songs and pop songs from the 1950’s and 1960’s. He enjoyed putting puzzles together, paint-by-numbers, word find games and playing Yahtzee. Frank smiled easily and loved being the center of attention.

He is survived by his sister Judy (Dal) Devries of Louisville, Colorado; nieces, Jodi Burke and Pam Burchett; nephews, Scott Devries and Mark Burchett. Frank was preceded in death by his parents and brother, Jim Burchett.

Blessed be his memory.
To order memorial trees or send flowers to the family in memory of Frank Burchett, please visit our flower store.