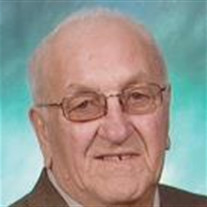 Francis (Fran) Uhlenkamp, the son of Frank and Catherine (Rieman) Uhlenkamp , was born May 12, 1927 in Milford, Iowa. At the age of nine months, his family moved to the Redwood Falls area and bought a 160 acre farm. He was the only son, and had 6 sisters. He attended the District 20 country school in Paxton Township through 8th grade, then farmed with his dad.

On January 17, 1949, Francis married Dorothy Pelz at St. Catherine’s Catholic Church. They lived in the upstairs of his parent’s farm house, then moved to a neighboring farm a mile away. In 1956 Fran bought the farm from his dad. They raised their four daughters and son on the farm. In 1986 they bought a trailer home on Lake Minnewaska in Glenwood. They spent many happy summers there, made many new friends, and caught lots of fish!

Fran retired in 1988, had a farm sale in 1989, and built a new home in Redwood Falls in 1990. They loved their new home in town and were able to enjoy it for over 25 years! Their farm site became the Pioneer Research Center. When Fran was diagnosed with lung cancer in 2004, they sold their lake home. They loved to travel and enjoyed many trips with their family. They called him “Friendly Fran,” as he loved to visit, and could visit with anyone! They even went on a cruise with Jeff. Fran also loved to golf and was a member of the Fairfax and Redwood Falls Golf Clubs.

He was a member of the school board at the Precious Blood Catholic School and a charter member of the Knights of Columbus since 1956. He was a Eucharistic Minister and usher at St. Catherine’s and ushered at many funerals until a few years ago. Fran and Dorothy delivered Meals on Wheels and he served on the Gilfillan Paxton Memorial Fund as secretary for 35 years.

Fran loved to play cards, especially cribbage. He played many games with his daughters, sons-in-law, grandchildren and great-grandchildren. He developed a very special relationship with friends at the RACC and has hosted cribbage at his home every Tuesday for the last several years. He started to cook and bake after they moved to town. His banana bread (with blueberries) and his Toothsome Fudge recipes have been shared with many.

Francis was preceded in death by his wife Dorothy; his parents; daughter Kathryn; sisters Irene, Mildred, Helen, Leona, and Anne; and brother Leroy.

Blessed be his memory.
To order memorial trees or send flowers to the family in memory of Francis H Uhlenkamp, please visit our flower store.