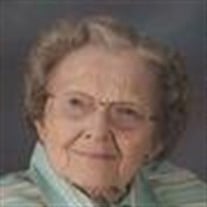 Florence Kletscher, 94, of Redwood Falls died Tuesday, October 14, 2014 at Redwood Area Hospital. Mass of Christian Burial will be held at 10:30 a.m. on Thursday, October 23, 2014 from St. Catherine’s Catholic Church with burial to follow in the church cemetery. Visitation will be held Wednesday, October 22, 2014, from 5 until 7 p.m., with a prayer service at 5 p.m., all at Nelson-Martin Funeral Home in Redwood Falls. Visitation will continue at the church on Thursday for one hour prior to services.

Florence Kletscher, the daughter of Peter and Margaret (Groebner) Prokosch, was born June 6, 1920 in Clements. She grew up in Clements and was baptized and confirmed at St. Joseph’s Catholic Church in Clements. Florence received her elementary education at District 15 in Clements and graduated from Wabasso High School. She began her telephone career at Marshall with Northwestern Bell Telephone Company. Florence worked there for a couple of years before transferring to Northwestern Bell Telephone at Redwood Falls where she was supervisor over all the operators. Her telephone career spanned 37 years while she worked in several different departments, including the District Office.

On June 1, 1957, Florence married Waldo Kletscher at St. John’s Catholic Church in Morton and they made the home in Redwood Falls. Florence moved into Garnette Gardens in 2009 where she continued to enjoy living independently and also serving on their Resident Advisory Board. Florence was a member of St. Catherine’s Catholic Church and its CCW. She also belonged to the Telephone Pioneers of America, Qwest Pioneers, Western Plains Council and Redwood Senior Center. Florence enjoyed old time music and dancing. She followed the Minnesota Twins baseball team and attended many home games. Florence enjoyed travel and visited most of the United States and Canada, as well as Havana Cuba, and the Catalina Islands. She also enjoyed Redwood Cardinal Boys Basketball, reading, eating out, listening to country music, and playing – and winning – BINGO.

Florence is survived by cousins; nieces; nephews, friends; Waldo’s step-mother, Lydia Kletscher of Belview; and four sisters-in-law. She was preceded in death by her husband, Waldo, on October 12, 2003; her parents; two brothers; a sister; and a sister-in-law.

Blessed be her memory.
To order memorial trees or send flowers to the family in memory of Florence Kletscher, please visit our flower store.