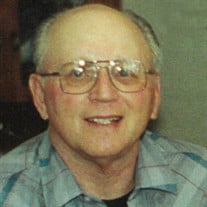 Eugene (Gene) Jensen, 85, of Redwood Falls, passed peacefully Friday, September 3, 2021
Gene was born June 26, 1936 near Evan, Minnesota. Gene spent the majority of his 85 years on his farm south of Redwood Falls, Minnesota. Gene attended Redwood Falls High School graduating in 1954. He was a member of the Redwood Valley Riders Saddle Club, and a member of FFA. Following high school, Gene joined the Navy and was stationed in Jacksonville, FL until 1957.
In Jacksonville, he met Patricia (Pat) Junkins, and married her December 31, 1956. They moved back to Redwood Falls, and they worked together on the farm. Gene and Pat were active members of Gloria Dei Lutheran Church. Gene & Pat spent 44 years together, building a family, a home and a life together filled with laughter, love, and good times until Pat’s death March 22, 2001.
Gene shared his love for life and farming with his family and friends, and he lived to farm until his last days. For the past 16 years, Gene shared his time and companionship with Linda Ahrens, a friend until the end.
Gene is survived by his daughter, Stacy (Scott) Hintermeister and children, Talia, Maya and Jack; his son, Todd (Peggy) Jensen, and children, Sonja, Jessica, Allisen & Robert; his sister, Jan Eilers, and her children, Jesse and Angela. He is survived by 7 great grandchildren and 1 great-great grandchild. He is preceded in death by his wife, Patricia (Pat) Jensen and parents, Stanley Jensen and Christine Jensen.
Blessed Be his memory.
To order memorial trees or send flowers to the family in memory of Eugne A. Jensen, please visit our flower store.