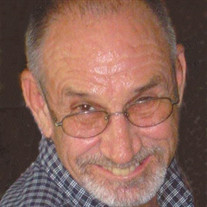 Eugene Moelter, 76, of Redwood Falls, died Tuesday, September 19, 2017 at his home. Mass of Christian Burial will be held at 11 a.m. on Saturday, September 23, 2017 from St. Catherine’s Catholic Church in Redwood Falls with burial to follow in St Anne’s Catholic Cemetery in Wabasso. Visitation will be held on Saturday, from 10 until 11 a.m., at the church.
Eugene Clement Moelter, the son of Benno and Frances Moelter was born July 2, 1941. He attended St. Anne’s Grade School and the State School in Owatonna, MN. While living in Wabasso, Eugene did various jobs, mowing lawns, shoveling snow and helping to clean his parents bar. In 1978 he moved to Redwood Falls and lived in the REM group home. He worked at Tersteegs Grocery store until his retirement in July 2010. Eugene was a gentle soul and he loved to ride his bike around the community to greet his many friends every day. He loved life and his REM family who were so special to him. His family is so grateful for all of them.
He is survived by his 4 sisters, Mary (Ron) Wuebben and Audrey Jones of Sioux Falls, SD, Kathy Morris from Maple Lawn Nursing Home in Fulda, MN, Cecilia Burchill of Worthington, MN, and many nieces and nephews. Eugene was preceded in death by his parents, 1 sister and 3 brothers.
Arrangements are with Nelson-Hillestad Funeral and Cremation Service of Redwood Falls. E-mail condolences may be sent via www.nelson-hillestad.com .

Blessed Be his Memory
To order memorial trees or send flowers to the family in memory of Eugene Moelter, please visit our flower store.