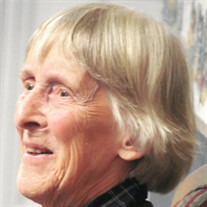 Elva Adeline (Kuester) Tiffany, age 94, passed away on December 16, 2018 at Sunwood Care Center, Redwood Falls. A celebration of Elva’s life will be held on Saturday, January 19, 2019 at 2:00 pm with visitation two hours prior at Living Word Church in Redwood Falls, Minnesota. The family requests memorials given to the Living Word Church.

Elva was born in Melrose Minnesota on September 25, 1924 to August and Adeline Kuester. Elva had fond childhood memories of her time living with her aunt in California helping with the apricot grove. She would travel there again to visit family in her adulthood. During World War II, Elva lived in Pasadena CA and contributed to the war effort as a “Rosie the Riveter”. When she returned to Minnesota, she attended nursing school in New Ulm, MN and graduated on September 10, 1952. Elva moved to Redwood Falls and worked at the hospital and for Dr. Ceplecha. It was there that she met her future husband, Gib Tiffany.

Gib and Elva were married on September 25, 1954, at the First Presbyterian Church in Redwood Falls. They made their home on Shady Knoll Farm in Paxton Township where they raised eight children. They were married for 36 years until his death in 1990. No matter how busy her life was she always had time for those she cared for, which included everyone from her family, to her church family, to random strangers in the grocery store. Elva enjoyed being outdoors, gardening, fishing, and being on the water. She loved the ocean. Elva was “organic” before it was a fad. She volunteered her time at local nursing homes, Johnson Park Place and the Morton Senior Center well into her 80’s. Always the caregiver, Elva lived with and cared for daughter Patsy in the last year of Patsy’s life. The most important part of her life was her faith. It sustained her during the tough times and elevated her during the joyous times. Her love of her savior, Jesus Christ, was front and center in her life and she shared that message with everyone she came in contact. If you heard that message you are blessed indeed.

Blessed be her memory.
To order memorial trees or send flowers to the family in memory of Elva Tiffany, please visit our flower store.