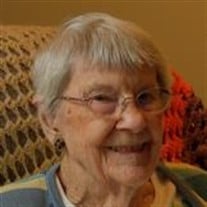 Elsie M. Schaffran, 96, of Sleepy Eye and formerly of Morgan died Friday, October 10, 2014 at Sleepy Eye Care Center. Funeral services will be held at 1 p.m. on Thursday, October 16, 2014 from St. John Lutheran Church in Morgan with burial to follow in the Morgan City Cemetery. Visitation will be held on Wednesday, October 15, 2014, from 5 until 8 p.m., at Nelson-Martin Funeral Home in Morgan and will continue at the church on Thursday for one hour prior to services.

Elsie Myrtle Schaffran, the daughter of Peter and Emma (Johnson) Kragh, was born April 4, 1918 in Vail Township, Redwood County. She grew up in the Wabasso area and graduated from Wabasso High School in 1936. Elsie went on to graduate from Brady & Rodgers Beauty School, Minneapolis, in 1937.

On October 15, 1939, Elsie married Raymond Schaffran in Wabasso and they moved into Morgan. The Schaffrans then lived in DeGraff, Wabasso, Lamberton, Redwood Falls, and Vesta before moving back to Morgan where they lived for the next 50 years. Elsie was self-employed as a beautician for 45 years. She was a member of St. John Lutheran Church in Morgan where she served as Luther League advisor, and belonged to Esther Circle, choir, quilting group, and St. John ALCW. Elsie and Ray were members of Levi’s & Lace Square Dancers; Elsie also enjoyed being part of the Happy Hoofers walking group.

Blessed be her memory.
To order memorial trees or send flowers to the family in memory of Elsie Myrtle Schaffran, please visit our flower store.