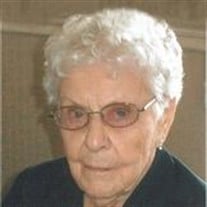 Arrangements are with Nelson-Hillestad Funeral Service of Redwood Falls. E-mail condolences may be sent via www.nelsonhillestad.com .

Elsie Margaret Rohde, the daughter of Gustav and Emma Lienig, was born April 7, 1919 in Morgan, Minnesota. She grew up in Morgan where she received her formal education and graduated from Morgan High School.

In August 1940, Elsie married Arnold Rohde. They made their home on Carlton Avenue and resided there for their entire married life. Following Arnold’s death in June 1995, Elsie continued living in her home until moving to Gil-Mor Manor.

She was a homemaker. Elsie enjoyed gardening and preparing meals as well as preserving the bounty from her garden. She loved feeding and watching birds, flower gardening, and animals – particularly cats and chickens. Elsie was an active member of St. John’s Lutheran Church where she did volunteer work and served on the funeral committee.

Blessed be her memory.
To order memorial trees or send flowers to the family in memory of Elsie M. Rohde, please visit our flower store.