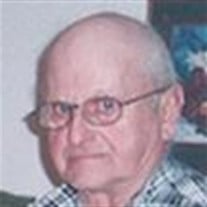 Elmer A. Zempel, the son of Oscar and Emma (Gens) Zempel, was born May 31, 1923. He was a unique and special man in many ways. A rarity in that he was born at his present residence, maintained that address his entire life and passed away Sunday in that same back bedroom in which he was born.

Elmer was a deeply religious man; he knew his Bible and was a lifetime member of St. John’s Lutheran Church in Morgan. He served on the church council and taught Sunday school for many years. At age 23, Elmer was married at St. John’s to his lifelong companion, Marjorie Jean Lieske, and remained that way for 68 years until his death. He always made it clear that he thought the world was over-regulated by man, that God had given him just 10 Commandments to follow and, if he did his best at them, he was good.

Elmer’s livelihood came mostly from a 160-acred piece of land. It was considered the home place, owned in excess of 100 years by first his grandfather, then father and finally, Elmer. It is a diverse piece of land at the edge of the Minnesota River Valley in Eden Township, some being pasture, some wooded, and 90 acres tillable. Over the years a living was made raising crops, milking cows, raising turkeys, hauling gravel, and taking on occasional “cat” work. Elmer enjoyed his caterpillars, doing dirt work with close friends or reshaping the home farm. His most notable project would certainly be his ponds. Over the years, Elmer created numerous dikes across a stream that runs through the length of his farm. Some of his earliest work has been in place over 60 years. Conservation, fish and wildlife were his initial concerns. As the decades passed though, recreation became more the focus. Elmer enjoyed his fishing and hunting, but his proudest times were when he could share with his friends and family. Over the years, the pond became the local swimming hole and weekend party spot. It was host to everything from 4-H, scouting, birthday and anniversary gatherings, couples club, and Bible studies – to keg parties. Elmer loved to come out to chat and visit with the young and old.

Locally, many people knew of Elmer as the guy who grades our roads. He maintained the Eden Township roads with pride for over 43 years, through sleet or rain or snow because he enjoyed being of service to the community. Elmer turned his work into a social event, viewing the changes in the area, stopping to help people, and sharing stories along the way.
Elmer’s family has always been close by. His sons, Eugene and Ronald live on adjoining farms with their wives, Lori and Betty. His daughter, Linda Hansen lives in nearby Sleepy Eye with her husband, Craig. He was also blessed with five grandchildren and three great-grandchildren.

Tragedy was a part of Elmer’s life. At age 34 he lost his five-year-old daughter, Susan. Again, at age 53, he lost his 19-year-old son, Loren. And now, at the very active age of 91, still deer hunting, riding 4-wheeler with his rat terrier, Molly, and enjoying Thanksgiving with family – his final tragedy came. Seven weeks to the day after discovering he had cancer, he has left us. Elmer has asked to be cremated. He asked that everyone take their time and effort and spend it with their own precious family rather than mourn his passing.

Blessed be his memory.
To order memorial trees or send flowers to the family in memory of Elmer A. Zempel, please visit our flower store.