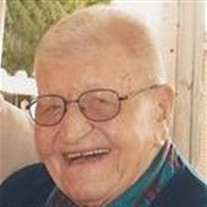 Elmer A. Kodet, 91, of Redwood Falls died Tuesday, July 22, 2014 at Sunwood Good Samaritan Center in Redwood Falls. Mass of Christian Burial will be held at 10:30 a.m. on Monday, July 28, 2014 from St. Catherine’s Catholic Church in Redwood Falls, followed by full military honors. Burial will be at St. Mary’s Catholic Cemetery, Bechyn. Visitation will be held at the church on Sunday, July 27, 2014, from 4 until 8 p.m., with a combined Rosary and Prayer Service at 7 p.m. Visitation will continue on Monday, at the church, from 9:30 until 10:30 a.m.

Elmer Alois Kodet, the son of Joseph C. and Louisa (Senkyr) Kodet, was born December 9, 1922 on the homeplace in Henryville Township, Renville County, Minnesota. He grew up on the family farm and received his elementary education in the nearby country school. Elmer was inducted into the United States Army on September 21, 1944 and served our country during World War II. He was awarded the Purple Heart for wounds received in action on May 16, 1945 in the Southern Philippines – Luzon liberation. Elmer was honorably discharged on August 4, 1946 and returned home to farm.

On June 3, 1947, Elmer married Mary Ann Malecek in St. Mary’s Catholic Church, Bechyn, and they made their home on the family farm. Elmer farmed for over 50 years and passed his love of farming on to his sons prior to his retirement in 1992. Following his retirement, working at Jackpot Junction and golfing occupied Elmer’s time. He and Mary moved into Redwood Falls in 2006.

Elmer was a member of St. Catherine’s Catholic Church. He was an avid golfer. Elmer also enjoyed fishing, hunting, and playing cards. Prayer was very important to Elmer; his dedication to daily prayers and the Rosary was the most precious gift he gave his family.

Blessed be his memory.
To order memorial trees or send flowers to the family in memory of Elmer Alois Kodet, please visit our flower store.