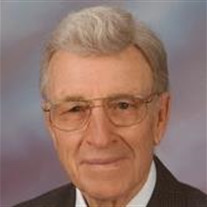 Elmer Jacobson, 95, of Redwood Falls died Friday, May 13, 2016 at Seasons hospice in Redwood Falls. Funeral services will be held at 11 a.m. on Tuesday, May 17, 2016 from Zion Evangelical Lutheran Church in Morton. Burial, with military honors will follow at Redwood Falls Cemetery. Visitation will be held Tuesday, from 10 until 11 a.m., at the church.

The family prefers memorials be directed to Seasons hospice, the Morton Community Foundation, or charity of the donor’s choice.

Elmer Norman Jacobson, the son of John A. and Margaret (Gullickson) Jacobson, was born January 10, 1921 in Morton. He grew up in rural Morton and received his formal education in District 6 West and Morton schools. In October 1942, Elmer enlisted in the United States Navy Seabees. He was assigned to the 36th Naval Construction Battalion and was stationed at Norfolk, Virginia and Oxnard, California before leaving for the South Pacific. While in the South Pacific, Elmer served on Okinawa, Esperitu Sante Island, New Hebride Island, Russell Island, Bougainville Island and Solomon Islands. He was honorably discharged in October 1945 and returned home to farm south of Morton.

On January 21, 1955, Elmer married Patricia “Pat” Goldsmith at Mason City, Iowa and they farmed southeast of Redwood Falls for 30 years. Following their retirement from farming, the couple lived on the farm for seven more years before moving in Redwood Falls. Elmer and Pat enjoyed spending the winters of 1985 to 2005 in Apache Junction and Mesa, Arizona.

Elmer served on the Redwood Falls Farmers Elevator Board from 1968 through 1983, serving as President of the Board for seven years. He was a member of Zion Evangelical Lutheran Church in Morton and served on the church board. Elmer has belonged to the American Legion in Morton since 1945 and served as Commander for several years. Since their retirement in 1985, he and Pat enjoyed traveling all 50 states, Canada, Mexico, Norway, Germany, Denmark and Luxenberg. Elmer also enjoyed golfing and playing cards with friends.

He is survived by his daughter, Judy Jacobson Berg and husband Charlie of Sartell; step-granddaughters Jill Berg and fiancé Roger Hood, and June (Berg) Metzger and Chad; step-great-grandchildren Elayne and Dominic; sisters Gladys Shelley of Cambridge and Norma Brothers of Minneapolis; sister-in-law Ruth Jacobson of Redwood Falls; 10 nieces and nephews; and many great-nieces and nephews. Elmer was preceded in death by his wife Pat in March 2014; brothers Harold, John and Clarence; sister Margaret Hulett; brothers-in-law Ray Hulett, Ervey Shelley, and Dick Brothers; and one nephew.

Blessed be his memory.
To order memorial trees or send flowers to the family in memory of Elmer Jacobson, please visit our flower store.