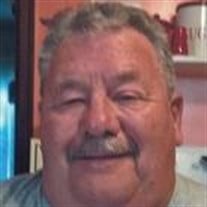 Edward Spelbring, 67, of Morgan passed away unexpectedly, at his home, Friday, August 1, 2014, following surgery for lung cancer earlier in the week. Funeral services will be held at 2 p.m. on Wednesday, August 6, 2014 from Nelson-Martin Funeral Home in Redwood Falls. Visitation will be held at the funeral home on Wednesday from 12 noon until 2 p.m. Burial will be at a later date.

Edward David Spelbring, the son of Chuck and Burdette Spelbring, was born February 9, 1947 and grew up near Forrestburg, South Dakota. He married and raised three children there. In 2004, Ed moved to Morgan, Minnesota.

On January 20, 2007, Ed married Maria (Seltrecht) Spelbring and they made their home in Morgan. He worked as the project manager for the fiberoptic division of CHR Solutions until his retirement in March of this year. Ed enjoyed spending time with his family. He was an avid hunter and fisherman, and also enjoyed woodworking and photography. Ed’s patience, love and kindness will be sadly missed.

He is survived by his wife, Maria, of Morgan; children Chad (Cindy) Spelbring, Kari Rickel, and Kim (Kasey); step-daughter Jennica Hacker; six grandchildren; and one great-grandchild.


Blessed be his memory.
To order memorial trees or send flowers to the family in memory of Edward David Spelbring, please visit our flower store.