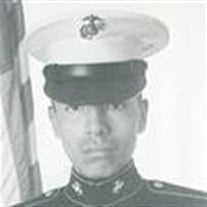 Edward Marroquin, 57, of Redwood Falls died Thursday, August 28, 2014 at his home. Funeral services will be held at 11 a.m. on Tuesday, September 2, 2014 from St. Cornelia’s Episcopal Church on the Lower Sioux Community. Burial, with military honors, will follow in the church cemetery. Visitation will begin at 1 p.m. on Monday, September 1, 2014 at St. Cornelia’s Church Hall.

Edward Raoul Marroquin, the son of Ernesto Marroquin and Ruth Dow, was born February 23, 1957 in St. Paul. He grew up in Fridley and Minneapolis and graduated from Roosevelt High School in 1975. Ed enlisted in the United States Marine Corp and served in Okinawa, Japan. He was proud to be a Marine. Following his honorable discharge, Ed lived in New Brighton where he worked as a carpenter and draftsman for many years.

Edward was married to Barb Wojciechowski. They were later divorced. Ed enjoyed sports. He ski-jumped for three years and was a member of the track team in high school; he lettered in both sports. Ed also enjoyed playing hockey. He loved spending time with his family and friends. Ed enjoyed doing leather work and making dream catchers and leather pouches.

Edward was preceded in death by his parents.

Blessed be his memory.
To order memorial trees or send flowers to the family in memory of Edward Raoul Marroquin, please visit our flower store.