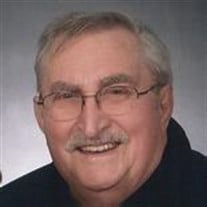 Edward Joseph Domeier, the son of Charles and Rose (Frassel) Domeier, was born October 22, 1930 in Wellington Township, Renville County, Minnesota. He grew up in the Fairfax area and received his elementary education in country school. Ed graduated from Fairfax High School in 1948. Ed enlisted in the United States Air Force in 1951 and served during the Korean Conflict. He was honorably discharged in 1955 and returned to the Fairfax area.

On June 8, 1957, Ed married Mary H. Johnson at St. Michael’s Catholic Church in Morgan and the couple made their home in Morgan. Ed was employed by SuperValu and Amoco. In 1971 they moved to Redwood Falls where Ed was employed by ActiveAid, Inc. until his retirement in 1996. Ed was a member of St. Catherine’s Catholic Church, the V.F.W. and Cooties. He belonged to Entertainment Unlimited for 25 years. Ed enjoyed entertaining at nursing homes and other functions and was known for singing “The Laughing Polka.”

Blessed be his memory.
To order memorial trees or send flowers to the family in memory of Edward Joseph Domeier, please visit our flower store.