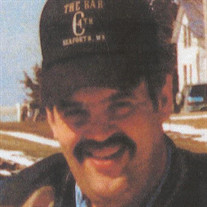 Duane Clark Bliss, the son of Daryl “Bud” and Cleona (Kaseforth) Bliss, was born September 23, 1955 in Redwood Falls. He grew up in Seaforth and received his elementary education in Seaforth and Wabasso Elementary schools. Dewey graduated from Wabasso High School and then attended Jackson and Willmar Vocational Technical Institutes.

Dewey worked in the electronics field in Hobbs, New Mexico and later returned to Minnesota and was employed as a janitor at Wabasso Public School. He worked at Harrahs in Lake Tahoe, Nevada and then Jackpot Junction Casino Hotel. Dewey then started driving semi’s – which was his passion. He most recently worked for Viessmann Trucking.

Dewey enjoyed traveling and visiting with friends and family. He was truly blessed with wonderful friends, cousins, and neighbors.

Dewey is survived by his sister Bette Bliss of Seaforth; and many aunts, uncles, cousins and friends.

He was preceded in death by his parents, Bud and Cleona Bliss

Blessed be his memory.
To order memorial trees or send flowers to the family in memory of Duane "Dewey" Clark Bliss, please visit our flower store.