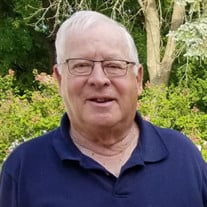 Douglas “Doug” Ziegenhagen, age 83, passed away on Tuesday, November 1, 2022 in his hometown of Morgan, Minnesota after a long battle with kidney failure. A Celebration of Life will be held at 1:00 p.m. on Saturday, December 3, 2022 in the United Methodist Church in Morgan, Minnesota.

Doug was born on May 21, 1939 to Chris and Isabel Ziegenhagen at the family farm in Eden Township. He attended District 57 county school in Brown County until 7th grade and graduated from Morgan High School in 1957.

After high school, he continued helping his dad on the family farm. He spent a summer shelling corn and worked for Blomeke Construction. He spent 2 years in the Army from 1959 to 1961 and was stationed in Baumholder, Germany.

Shortly after leaving the military, Doug met and married the love of his life, Sue. They were married 53 years. Together they built a home and worked the family farm. Eventually, they adopted two children, Amee and Brian. They also graciously welcomed 3 exchange daughters from Germany in their home.

Doug’s greatest accomplishment was earning his pilot’s license. He was also an avid hunter and fisherman. His biggest fish tale was when he caught two 30-inch walleyes on Lake Superior with his Army buddy, Lance Lind. Doug didn’t retire from farming until he was 80 years old. Even though he was still farming, he often spent his mornings drinking coffee at Potter’s elevator. He was an active member of the United Methodist Church in Morgan, where he served countless years on the board of trustees.

Doug will forever be remembered as a loving husband, dad, grandpa, uncle, and friend. He leaves behind a legacy of hard work, jokes, laughter, and love.

Doug was preceded in death by his parents, Chris and Isabel Ziegenhagen; sister, Joan Gordon; brothers, James and Don Ziegenhagen.