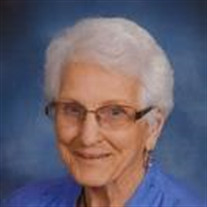 Dorothy Soupir, 91, of Redwood Falls died Wednesday, March 2, 2016 at her home. Mass of Christian Burial will be held at 10:30 a.m. on Tuesday, March 8, 2016 from St. Catherine’s Catholic Church in Redwood Falls with burial to follow in St. Joseph’s Catholic Cemetery, Clements. Visitation will be held on Monday, from 4 until 7 p.m., with a prayer service at 6:30 p.m., all at Nelson-Hillestad Funeral Home in Redwood Falls. Visitation will continue on Tuesday, from 9:30 until 10:30 a.m., at the church

Dorothy Loretta Soupir, the daughter of Joseph and Katherine (Scanlan) Kenney, was born February 2, 1925 in New Ulm. She grew up in Redwood Falls and received her formal education here. Following her graduation from Redwood Falls High School, Dorothy attended the Minnesota School of Business in Minneapolis.

On January 10, 1949, Dorothy married Albert Soupir in St. Catherine’s Catholic Church. The couple farmed near Morgan until 1962 when they purchased a farm near Clements. Following Albert’s death, Dorothy moved into Redwood Falls in 1991. She was a member of St. Catherine’s Catholic Church and the Christian Mothers. Dorothy volunteered her time working at the Food Shelf, delivering Meals on Wheels, and helping with church functions.

In her spare time, Dorothy loved to play cards and dominos. She enjoyed flower gardening, visiting friends at Garnette Gardens, and shopping. Dorothy enjoyed the company of many friends through the years. Her family was very important to Dorothy, as was her church. She was a woman of prayer.

Dorothy is survived by her children Richard (Kristy) of Prior Lake, Mark (Kathy) of Redwood Falls, David (Rose) of Marshall, Karen (John) Eull of Plymouth, and Sherry Iverson of Maple Grove; 15 grandchildren; 12 great-grandchildren; and her brother Jim Kenney of Isle. She was preceded in death by her parents, her husband Albert in 1990, son Gary, and nine siblings.

Blessed be her memory.
To order memorial trees or send flowers to the family in memory of Dorothy Soupir, please visit our flower store.