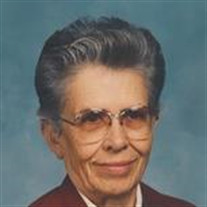 Dorothy A. Gluth, 91, of Sleepy Eye and formerly of Morgan died Friday, May 1, 2015 at Sleepy Eye Care Center. Funeral services will be held at 11 a.m. on Wednesday, May 6, 2015 from Morgan United Methodist Church with burial to follow in Eden Methodist Cemetery, rural Morgan. Visitation will be held at the church on Wednesday from 10 until 11 a.m.

Dorothy Augusta Dittbenner Gluth, the daughter of Herbert Oscar and Eleonore Olida (Dirks) Dittbenner, was born January 8, 1924 at Slayton. She grew up in the communities of Slayton, Wells and Mankato. Dorothy received her formal education in the Wells public school. She graduated high school in 1941 and then attended teacher’s training in Wells. Dorothy earned her teaching certificate in 1942 and taught country school in Brown County Districts 74 and 35 for the next three years.

On June 9, 1945, Dorothy married Clayton Gluth at the Wells Methodist Church. They lived and worked together on the family farm in Eden Township until retiring to Morgan in 1979. The couple moved to Sleepy Eye in 2007 where Dorothy was living at the time of her death.

While on the farm, Dorothy enjoyed gardening, sewing, doing needlepoint and, of course, raising chickens and ducks. She had hundreds of laying hens and laying flock of ducks of which she sold the eggs to the hatchery in the spring.

Clayton and Dorothy had two children, William and Donna. Dorothy enjoyed watching her grandchildren and great-grandchildren grow and also enjoyed spending time with her family and friends. She was a member of the Morgan United Methodist Church where she taught Sunday school for a time. When her children were growing up, Dorothy was a leader for the Eden Eagles 4-H Club.

Dorothy is survived by her daughter Donna Olson of Brownton; daughter-in-law Lucy Gluth of Sleepy Eye; grandchildren Rebecca (Pete) Haack of La Crescent, Robert Olson of Winthrop, Brenda (Kevin) Lin of Taipei, Taiwan, Richard Olson of Eden Prairie, and Brian (Heidi) Gluth of Champlin; great-grandchildren Toni and Lori Haack of La Crescent, Keanu and Kate Lin of Taipei, and Courtney and Lindsey Gluth of Champlin; and many relatives and friends.

Blessed be her memory.
To order memorial trees or send flowers to the family in memory of Dorothy Augusta Gluth, please visit our flower store.