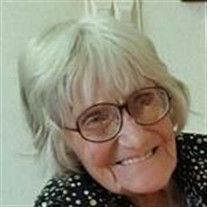 Dorothea Paul, 87, of rural Morton passed away, after a very brief stay in Hospice at the Sunwood Good Samaritan Home in Redwood Falls, on May 23, 2017 with family at her side. A Celebration of Life will be held at the Redwood Area Community Center, 901 E Cook St, Redwood Falls, Minnesota on Sunday, June 18, 2017 from 2:30-4:30 p.m., with a time for sharing memories at 3 p.m. Lunch will be served. Please join us.

Dorothea was born on April 17, 1930 to Beryl (Whitaker) and William Scheffler in Minneapolis. She grew up learning to love the land and farming near Morton. After graduating from West High School in Minneapolis, she attended classes at the University of Minnesota. In 1949, she met and married George Henry Paul. They began their life together on the family farm and raised three children Beryl, Michael and George William. Her husband passed away in 1985. Later in life, she met another farmer, James “Jimmy” Mayer. Together they enjoyed antiques, photography, attending events and pursuing their mutual love for all things farming and art.

While her husband pursued a career in construction building roads and later for MNDOT, Dorothea was the farmer in the family. She was an independent strong woman with an enduring work ethic. Concerned about conservation, she pioneered farming techniques that earned her a Star Farmer Award and recognition for her forward thinking. With a voracious appetite for learning, she often attended workshops, educational events and spent many hours researching topics of interest.

At 34 years of age, in addition to farming and raising a family, she began a second career as an artist, specializing in agriculture with oils, acrylics and water colors. Her keen eye and life experience, having personally lived the life of a farmer from a small child helping to care for her father’s work horses to running her own acreage, gave her great insight. Her passion was realistic depictions that reflected a desire to document history and lives on the farm as well as other subjects. She currently had paintings in all 50 states and over 50 countries in the world along with approximately 200 magazine covers as well as many awards showcasing recognition and appreciation of her talents.

Dorothea is survived by her fiancé, James Mayer of Winthrop; children, Beryl (Myron) Wernberg, of Bemidji, and Michael (Barbara) Paul of Winston, Georgia; daughter-in-law Pailin “Ang” Paul of St Johns Island, South Carolina; and granddaughter Char Blashill of Bemidji; as well as cousins and other relatives.

She was preceded in death by her parents, her husband George Henry, and her son George William.

She lived a life marked by dedication, a great sense of humor and an uncanny ability to endure tough times and still stand tall. She is now driving her favorite tractor among the fields of gold with a joyous smile on her face.
To order memorial trees or send flowers to the family in memory of Dorothea Paul, please visit our flower store.