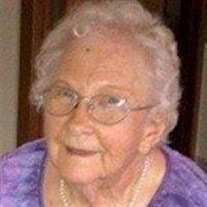 Doris was born in 1923 to Albert and Ella (Linstrom) Oedekoven, in Sturgis, South Dakota. She was raised on the family ranch near Vale, South Dakota, attended grade school at Nine Mile School and graduated from Sturgis High School.
She married Richard Williamson in 1943 in Sturgis. They ranched near Union Center for 19 years. Due to Richard's health, they moved to Hot Springs, South Dakota. Upon Richard's death in 1996, she moved to Sturgis.
While in Hot Springs, Doris worked at the VA Medical Center, the school lunch program, and at the Hot Springs Public Library where she served as librarian for 12 years.
Doris and Richard were instrumental in developing programs for the handicapped which included a group living facility in Hot Springs. They were involved in the Association for Retarded Citizens, charter members of the Evangelical Free Church, and volunteered at the Elderly Meals Program. Since moving to Sturgis, Doris has also volunteered at the Sturgis Hospital.
Doris Williamson, 93, formerly of Sturgis, died Monday, December 5, 2016, at Seasons Hospice House in Redwood Falls, Minnesota.
Survivors include her four daughters, Norma (Bill) Wright, Sandra Williamson, Milaca, Patricia (Dick) Salmon, Redwood Falls, and Joyce (Ron) Karlsten, Mukilteo, Washington; a son, Dick (Jody)Williamson, Fort Worth, Texas; six grandchildren; 12 great-grandchildren; one brother, Allen (Hannah) Oedekoven, Sturgis; and many nieces, nephews, and special friends.
She was preceded in death by her husband of 53 years, Richard; a daughter, Nancy; an infant son; four brothers, two sisters; and her parents along with many relatives and friends.
Visitation will be held from 5 until 7 p.m. on Friday, December 9, 2016 at Kinkade Funeral Chapel in Sturgis.
Services will be at 2:30 p.m. on Saturday, December 10, 2016 from LifeSpring Wesleyan Church in Sturgis with Pastor Aaron Munsell officiating. Burial will follow at Bear Butte Cemetery.
Memorials have been established for LifeSpring Wesleyan Church and the Service Enterprise Inc. of Redwood Falls, Minnesota.
To order memorial trees or send flowers to the family in memory of Doris Williamson, please visit our flower store.