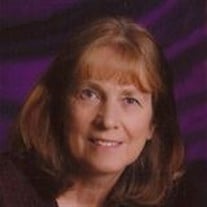 Donna Jean Lothert, the daughter of Loren and Martha (Mielke) Raddatz, was born March 11, 1954 in Sleepy Eye. She was baptized on April 4, 1954 and confirmed on May 25, 1969 in St. John’s Lutheran Church, Morgan. Donna graduated from Morgan High School in 1972 and went to work as an eligibility worker for Redwood County Human Services, now Southwest Health and Human Services, for the next 45 years. She retired in September 2017.

On October 22, 1983, Donna married Allan Lothert and they made their home in Redwood Falls where they raised their three sons and cherished the time spent with them. She was a member of St John Lutheran Church. Donna was a volunteer for the Redwood Booster Club and Relay For Life, and also served on the Booster Club board and as an officer of the AFSCME union at work.

Donna enjoyed being outside, whether it was walking, taking care of her flowers, or gardening, as well as playing softball and volleyball on the city leagues. She enjoyed traveling with her family, sightseeing, photography, and attending her sons’ sporting events. Donna loved spending time at the lake with her family. While at the lake Donna enjoyed her pontoon rides, fishing, and the sunsets. She also enjoyed doing crossword puzzles, Sudoku, and riding motorcycle with Al.

Donna was a loving wife, mom and grandma to her grandson and new granddaughter. She is survived by her husband Allan of Redwood Falls; sons Brent Lothert of Waseca, Daniel (Christi) Lothert of Annandale, and Justin Lothert of Redwood Falls; grandchildren Kalen and Kinley Lothert; father Loren Raddatz of Morgan; and sisters Joanne Robinson of Redwood Falls, and Karen (David) Brandel of St. George. Donna was preceded in death by her mother Martha Raddatz, and several aunts and uncles.

Blessed be her memory.
To order memorial trees or send flowers to the family in memory of Donna Jean Lothert, please visit our flower store.