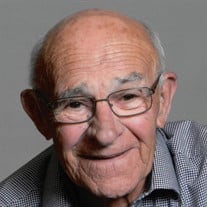 Donald Reding obituary
Donald Edward Reding, age 79, of Morgan, died on Friday, August 30, 2019 at his farm, surrounded by his family. Mass of Christian Burial will be held at 10:30 a.m. on Friday, September 6, 2019 at St. Michael’s Catholic Church in Morgan, with burial to follow in St. Michael’s Catholic Cemetery in Morgan. Visitation will be held from 4 p.m. until 8 p.m. on Thursday, September 5, 2019 at St. Michael’s, with a prayer service at 4 p.m. Visitation will continue one hour prior to the service on September 6, 2019.
Arrangements are with Nelson-Hillestad Funeral and Cremation Services of Redwood Falls. E-mail condolences may be sent to www.nelson-hillestad.com .
Don was born to Raymond and Beatrice Reding on February 29, 1940 in Three Lakes Township, Minnesota. He attended St. Michael’s Elementary School and graduated from Morgan High School in 1958. Don was the third generation Reding to be on the board at Redwood County Mutual Insurance. He served for 44 years, including 12 years as president, until his retirement in 2016. He also earned state and national recognition within the insurance industry.
Don married Donna Duscher on July 13, 1963 at St. Michael’s. Don lived on and farmed the Reding family Century Farm his entire life. He and Donna were blessed with six children and 17 grandchildren and friends beyond measure.
Don loved his family, farm, friends, and community. He was generous with his time and heart. Being kind was in his nature. Don loved people and talked to everyone he met. Nobody was a stranger to Don, only a friend he didn’t yet know. Many a hitchhiker received a front seat ride from him while his kids rode in the back of the station wagon. Don was a lifelong member of and dedicated to serving St. Michael’s Church and School. He participated in his community in many ways, including through Knights of Columbus and community theater.
Don’s children and 17 grandchildren were dear to his heart. Attending their school and social events was his joy, especially attending “wrastlin”. On Father’s Day weekend 2019, he enjoyed one last trip to Las Vegas with his boys; no further details are available.
Don is survived by his wife of 56 years, Donna, and children Troy (Jeannice) Reding of Orono, Michele (Charlie) Quast of Redwood Falls, Chad Reding of Redwood Falls, Corey (Stacey) Reding of Morgan, Ryan (Carrie Kolsrud) of Bloomington, and Shane (Kathy) Reding of Buffalo and grandchildren Eliah, Elizabeth, Samuel, Victoria, Marshal, Spencer, Easton, Avery, Taylor, Alix, Riley, Caleb, McKenna, Jacob, Ella, Maggie, and Norah. He is also survived by his sister, Alice Otto , brother Larry (Monna) Reding, sister-in-law Joyce Reding, sister-in-law Phyllis (Marlin) Hennen, sister-in-law Shirley Redmann, brother-in-law Warren (Jean) Duscher, brother-in-law Steve (Jacki) Duscher, brother-in-law Tom (Sandy) Duscher, and many nieces and nephews. He was preceded in death by his parents, brother Richard and his wife Evelyn, brother James, sister Joan and her husband Art Roemer, in-laws Ray and Geraldine Duscher, and brothers-in-law Leonard Otto and Merlin Redmann.
Don will be greatly missed. Blessed be his memory.
To order memorial trees or send flowers to the family in memory of Don Reding, please visit our flower store.