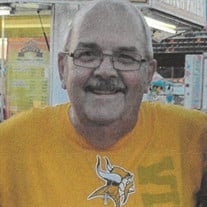 Denny, the son of Willie “Bill” and Paulena “Lena” (Krueger) Sanow, was born August 22, 1954 in Worthington, Minnesota. He attended school in Fulda, graduating in 1972. He attended Pipestone Votech, where he graduated in 1974. Denny was an auto mechanic and parts salesman for 38 years, retiring in 2014. He was an avid Minnesota Viking’s Fan. Denny also enjoyed golfing, bowling, family gatherings, and attending his grandson’s hockey games.

He was preceded in death by his parents, Bill and Lena Sanow; brother, Pudge; sister, Carol Johnson; brother-in-law, Doug Johnson.

Blessed be his memory.
To order memorial trees or send flowers to the family in memory of Dennis "Denny" Sanow, please visit our flower store.