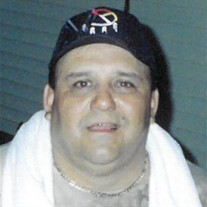 Dennis “Big Bundy” Berry, 58, of Morton, died December 30, 2018 at the Mayo Medical Health System of Mankato. Memorial Services will be 11:00 am on Monday, January 7, 2019 from Nelson-Hillestad Funeral Home of Redwood Falls, with burial at the St. Cornelia Cemetery of Lower Sioux, Morton. Visitation will be held Monday from 9:00 am till time of services all at Nelson-Hillestad Funeral Home.

Dennis was the son of Robert Berry, Sr and Betty Lee. Dennis was born August 25, 1960 in St. Paul, Minnesota. He later moved to Morton where he attended Morton High School. He married Cathy Pendleton and later married Heather Sherman. Dennis worked for the Lower Sioux Indian Community in Customer Service for many years.

Dennis loved to spend time on the lake fishing with family & friends. He enjoyed life as if every day could be his last. He always had words of wisdom to offer. When you needed to be told something good or bad, he told you, nothing went unsaid. As a father and a friend, he was there for you, anything you needed, if he had it and you needed it, it was yours. He loved to watch tv, read the newspaper, cook Sunday dinners or take a quick trip to the DQ for an ice cream treat with his grandchildren, were some moments he shared. He like to take them to MOA & a hotel to the water park just to have fun. He was all about making every day count. Even during his sickest days, he took them to the Valley Fair, school and shopping.

He tried very hard to make sure everyone had what they needed. He loved to play bingo, go to basketball games, grill out, watch movies, anything fun. He was all about having a good time and you didn’t need to have lots of money to do it. Everyone loved being around Big Bundy, during his younger years he was the life of the party, the go getter. If he wanted to do something, he did it, he didn’t wait for anyone, he was a now or never kind of person. He was loved by everyone and will be missed dearly. He didn’t want anyone to cry or be sad that he’s gone. Most importantly he wants us to help each other & be there for one another and to treat people with respect.

Blessed be his memory.
To order memorial trees or send flowers to the family in memory of Dennis "Big Bundy" Berry, please visit our flower store.