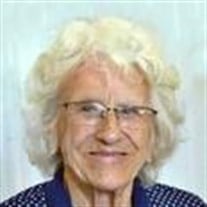 Delphia Lorraine Eischens, the daughter of Daniel and Agnes (Hopp) McMasters, was born November 10, 1922 in Franklin. She grew up in Franklin, where she was a member of the high school girls’ basketball team. Mickey graduated from Franklin High School.

On June 30, 1945, Mickey married Benedict “Ben” Eischens in Franklin. The couple settled on the Hoover farm near Redwood Falls and later moved to Morton where they lived for a few years. In 1948, they moved to their home in Redwood Falls. Mickey was employed by the New Ulm Journal circulation department for over 30 years. In her spare time she enjoyed crocheting, golfing, and bowling. Mickey was a member of St. Catherine’s Catholic Church and the CCW.

Mickey was preceded in death by her husband Ben in 2009; granddaughter Jamie Hansen in 2001; brother and sister-in-law Marvin and Rose MacMasters; and brothers Clifford McMasters and Frank McMasters.

Blessed be her memory.
To order memorial trees or send flowers to the family in memory of Delphia "Mickey" Lorraine Eischens, please visit our flower store.