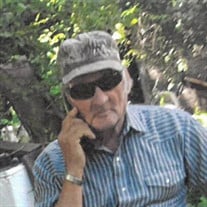 Delano Melvin Anderson was born on October 5, 1940 in Appleton, Minnesota. He was adopted by Melvin and Alvina (Oden) Anderson. Delano attended school in Appleton. As an adult he had joined the National Guard in Appleton and served for 6 years. He married Shirley Smith on November 2, 1963 in Webster, South Dakota. Delano and Shirley lived in different areas due to jobs. They finally settled by Franklin, Minnesota and raised their 4 children. Delano was a truck driver for Clarence Washburn, John Seehausen and Troy Seehausen over the years.

Delano was a member of St. Luke’s Lutheran Church in Franklin, where he would help with ushering. He enjoyed tilling the garden so Shirley could plant the gardens. Delano enjoyed fishing, tinkering with cars/trucks and spending time with family.

Delano is preceded in death by his parents, Melvin and Alvina Anderson, granddaughter, Mariah Anderson and son-in-law Rick Thompson.

Blessed be his memory.
To order memorial trees or send flowers to the family in memory of Delano M. Anderson, please visit our flower store.