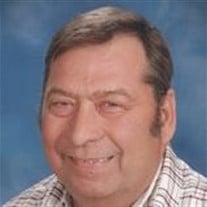 On July 8, 1967, Dave married Debra Jean Halter in the Church of Christ in Redwood Falls. They made their home on their farm west of Redwood Falls. Dave was a lifetime farmer. He also did bodywork at the Scott-Preusse dealership and worked as a mail carrier for the U.S. Postal Service for 24 years.

Dave was a member of First United Methodist Church in Redwood Falls where he served as an usher and greeter. He belonged to Redwood Valley Riders saddle club. Dave enjoyed riding horse and attending athletic activities and he loved spending time with his grandchildren.

Blessed be his memory.
To order memorial trees or send flowers to the family in memory of David Paul Woodford, please visit our flower store.