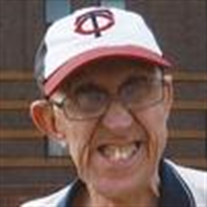 David Hanson, the son of Alfred Tobakan and Elsie Hanson, was born June 6, 1947 in Douglas County, Minnesota. He resided at Faribault State Hospital for 13 years. On August 15, 1969, David moved to the Robert Milton Home (Now REM-South Central Services) in Redwood Falls where he was employed as a kitchen worker. David began attending Redwood County DAC on October 28, 1978 and participated in the Work Oriented Program while continuing part-time employment in the housekeeping department at REM. In 1980, David began working full time at Service Enterprises in Redwood Falls.

David loved to work. He enjoyed his coffee, going on trips, and anything to do with trains. David enjoyed bowling, going on outings in the community, going to garage sales, going out for lunch, pets (especially dogs), and listening to old time music. He enjoyed going to the life skills group and learning how to use the computer. He loved to stay active and moving. David had a strong work ethic and loved his job at the pallet shop. He loved taking pictures and was quite a photographer.

David had a wonderful smile and sense of humor that would brighten up everyone’s day.

David is survived by REM staff and housemates – all of whom he considered his family. He was preceded in death by his mother in 1960.

Blessed be his memory.
To order memorial trees or send flowers to the family in memory of David Hanson, please visit our flower store.