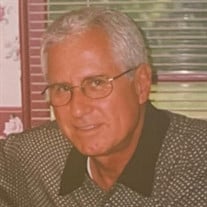 Daryl Dean Hilbert was born May 27, 1942 in Redwood Falls Hospital, the son of Harold and Delorias (Knigge) Hilbert of rural Redwood Falls. He was baptized, attended Sunday School, and was confirmed in the First Presbyterian Church of Redwood Falls. Daryl graduated from Redwood Falls High School in 1960. He was very active in FFA and 4-H during his high school years. He raised Dairy cows, went to Dairy Shows, won Championship and Showmanship Awards in the County and State Fairs both in 4-H and FFA. He was also interested in helping his dad with his dairy herd and diversified farming.
After graduation from high school he attended the University of Minnesota. He then entered the Navy. He spent April 1964 - October 1967 on the USS DARTER as a TM3- Torpedomans Mate- 3rd Class then the USS TRUMPET FISH October through December of 1967. There he met his first wife, Jean Ann (Snead) Hilbert. They had two children, Kimberly Kay and Bret Snead Hilbert. They all resided in St. Louis, MO. Daryl began his career with State Farm Insurance in St Louis in 1969. He had numerous, prominent awards throughout his career. He retired from State Farm due to Parkinson’s Disease in 2006. He loved restoring his dad’s 1940 Ford Pick-up. They, he and the truck, won 1st place in division, in the Forest Park/Easter car show. He was a great pool player. He loved to have fun! He was on a Bocce Ball League. Was pretty good at golf some say... He was a very welcoming, genuine, kind, and happy man. He always pushed for the positive in people’s lives. He loved and kicked butt in shuffleboard too. He was a complete gentleman, appreciated being well dressed and well groomed. He had the best kept lawn EVER. He spoiled his kids- but not rotten (some say) and loved his grandkids and extended family. He entered Friendship Village at Chesterfield, MO in 2018. He celebrated his 80th birthday this year in May. Daryl had numerous friends wherever he walked in his lifetime with his families, business, sports, accomplishments, traveling, music venues, and love for adventure and social interactions.

Daryl was preceded in death by his parents Harold and Delorias Hilbert, all grandparents, uncles and aunts, several cousins and his special friends.

God Bless Daryl’s Memory. Prayers and Love for all those suffering from the dreaded disease, Parkinsons.
To order memorial trees or send flowers to the family in memory of Daryl D. Hilbert, please visit our flower store.