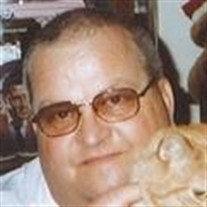 Darrel Lee Jakes, the son of Stanley and Dorothy (Minkel) Jakes, was born July 22, 1961 in Olivia. He was the second youngest in a family of 12. Darrel grew up in Bird Island. He was baptized on January 14, 1962 by Pastor John Burman and confirmed on May 2, 1976 by Pastor Paul Sorlien. Darrel received his formal education in Bird Island, graduating from Bird Island Public School in 1979.

Darrel held several jobs and has been a caregiver to many family members and friends over the years. He lived in Redwood Falls, Morton, Hutchinson, and Worthington, before moving to Sioux Falls, South Dakota and then back to Redwood Falls. Darrel was a member of Our Savior’s Lutheran Church in Bird Island. He loved to travel with family and, as always, was a caregiver to all people of all ages and needs. Darrel had a love for animals and went out of his way to care for them. He really enjoyed all God’s gifts on the earth – especially the parks and lakes. Darrel loved to ride is bike and was excited to see the first robin each spring.

Darrel was extremely dedicated to his mom; they drove all over together, singing along to the radio as they travelled. They enjoyed feeding ducks and geese at the parks they visited. Darrel was a loyal brother to his sister, June, and spent much time praying with her. He had a very strong faith in God; his favorite saying was “every day is Sunday!” Darrel always ended his letters and cards to family with “God loves you and so do I!” He kept all family members up-to-date by staying connected with them in person and with his cell phone. He enjoyed decorating for all the holidays and dressing up like Santa for his nieces and nephews.

The family gives a huge thank you to Darrel’s nephew, Luke Jakes, for being so dedicated to his uncle.

Whenever someone passed away, Darrel said they were dancing in heaven – now he is, too! Blessed be his memory.
To order memorial trees or send flowers to the family in memory of Darrel Lee Jakes, please visit our flower store.