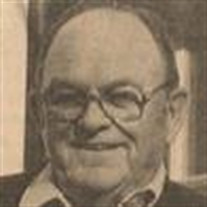 Daniel L. Braken, the son of Daniel and Lillian (Hermanson) Braken, was born October 19, 1922 in Jasper. He grew up in Jasper and received his formal education there, graduating from Jasper High School in 1940. Daniel worked at Rae’s Café where he met co-worker Marjorie “Marge” Bauman. On October 23, 1949, Daniel married Marge at Trinity Lutheran Church in Jasper. They lived in Jasper for two years and Daniel continued to work at Rae’s Café. They then moved to Madison, South Dakota for a year and a half and then to Fullerton, California where Daniel managed a liquor store.

Daniel was inducted into the United States Navy during World War II and served in Hawaii as a Navy Corpsman with the Marine Corps and in the Navy hospital in Pearl Harbor. He then was stationed out of Norfolk, Virginia aboard the U.S.S. Pocono. Daniel was honorably discharged following six years of service to his country. In 1965 the Brakens moved to Redwood Falls where Daniel and Marge purchased the Dari King.

Daniel was a member of St. John Evangelical Lutheran Church in Redwood Falls and the American Legion. He enjoyed playing cards and fishing. Daniel was an avid reader.

He is survived by his wife Marge of Redwood Falls; daughter Cynthia (John) Vanderwerf of Fridley; son Dan of Redwood Falls; nine grandchildren; several great-grandchildren; and sister-in-law Carol Braken in Fullerton. Daniel was preceded in death by his parents; son Spencer in 2003; great-grandson Ian; brothers Gordon, Glenn, and Douglas; two sisters-in-law; and brothers-in-law Gordon and Elwood.

Blessed be his memory.
To order memorial trees or send flowers to the family in memory of Daniel L. Braken, please visit our flower store.