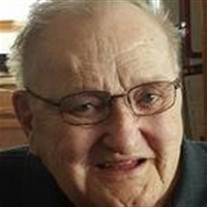 Dallas Henning, 82, of Redwood Falls died Saturday, September 10, 2016 at Redwood Area Hospital. Funeral services will be held at 11 a.m. on Friday, September 16, 2016 from Bethany Lutheran Church, Wabasso, with burial to follow in Wabasso and Bethany Cemetery. Visitation will be held Thursday, September 15, 2016, from 4 until 8 p.m., with a prayer service at 7:30 p.m., all at Nelson-Hillestad Funeral Home in Redwood Falls. Visitation will continue on Friday, from 10 until 11 a.m., at the church.

Dallas Darold Henning, the son of Bernhard and Loretta (Werner) Henning, was born March 12, 1934 in Wabasso. He grew up in the Wabasso area and received his formal education at Wabasso High School and Mankato Vocational Technical College. Dallas was inducted into the United States Army on August 25, 1954 and was stationed in Germany. Following his honorable discharge on August 6, 1957, Dallas returned to Redwood County.

On March 2, 1963, Dallas married Marylin M. Kolp and they made their home in Redwood Falls. Dallas was a front-end alignment mechanic for the Burris, Fran Dryer, and H&L Motors car dealerships until he became totally disabled due to a work-related car accident in 1969. Dallas was a member of Bethany Evangelical Lutheran Church in Wabasso and was a Gold Member of the V.F.W. He enjoyed antique cars, playing cards, watching sports – particularly the Vikings, photography, and jigsaw puzzles.

He was preceded in death by his brothers Lavern, Leland, and Marlan Henning; and brother-in-law Ralph Kolp.

Blessed be his memory.
To order memorial trees or send flowers to the family in memory of Dallas Henning, please visit our flower store.