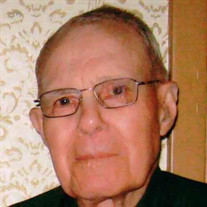 Dale G. Thompson, age 93, of Watertown, SD, formally of Morton-Franklin MN, area passed away on Friday, September 2, 2016, at the local hospital. Funeral services will be at 10:30 a.m. on Tuesday, September 6, 2016, at Crawford-Osthus Funeral Chapel in Watertown. Pastor Steve Biswell will officiate. A funeral service will also be held at 11:00 a.m. on Wednesday, September 7, 2016, at Nelson-Hillestad Funeral Home in Redwood Falls, MN.
Visitation will be held one hour prior to each service.
Burial will be at Franklin Cemetery in Franklin, MN. Active pallbearers will be members of the Roethler families.
Dale was born on February 12, 1923, in Dodge County, MN, to John and Ina Mae (Saxton) Thompson. He graduated in 1941 from Morton High School, Morton, MN. Dale then enlisted in the U. S. Coast Guard, where he served his country for three years. After his honorable discharge he started working for Botsford Lumber Company, which was sold to United Building Center and then became Pro-Build Lumber. Dale worked in this industry for 60 years, beginning in Ortonville in 1947 before moving to Watertown in 1949.
He was a member of the American Legion Post 17 in Watertown. Dale loved to hunt and fish. He was very involved in cheering on the Minnesota Twins and Minnesota Vikings. Dale also loved playing cards, especially pinochle.
Dale is survived by his brothers: Raymond (Carol) Thompson of Franklin, MN, and Ronald (Dorothy) Thompson of New Ulm, MN; many nieces and nephews; and his close friends: Ken (Carol) Roethler of Watertown, SD, Michael Roethler of Watertown, SD, Douglas (Val) Roethler of Aberdeen, SD, Mary (Steve) Schilder of Faulkton, SD, and Kathy Roethler of Watertown, SD.
He was preceded in death by his parents and three sisters: Dorothy Sather, Viola Downs and Harriet Schulte.
To order memorial trees or send flowers to the family in memory of Dale G Thompson, please visit our flower store.