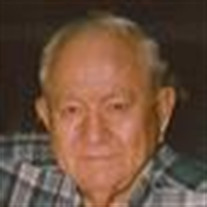 Clift Clayton Wolter, the son of William E. and Myrtle (Clift) Wolter, was born June 26, 1928 in Redwood Falls. He grew up in the Franklin area and graduated from Franklin High School in 1946. Clift enlisted in the National Guard and was activated in 1951 with the 135th Tank Company of Redwood Falls.

On November 17, 1951, Clift married Marilyn Sherman in Central Lutheran Church, Fairfax. They made their home at Camp Rucker in Enterprise, Alabama and moved back to Franklin following Clift’s discharge from the National Guard in 1952. Clift farmed until his retirement in 1992; the couple moved into Franklin in 1994. They enjoyed summer weekends at their lake home on Green Lake and winters in Apache Junction, Arizona.

He is survived by his wife Marilyn of Franklin; sister Jean (Bob) Briggs of Tucson, Arizona; three nieces; three nephews; special friend Jan Stern of Minneapolis; and many friends. Clift was preceded in death by brothers Lyle and William; and foster son Darrell Stern.

Blessed be his memory.
To order memorial trees or send flowers to the family in memory of Clift Wolter, please visit our flower store.