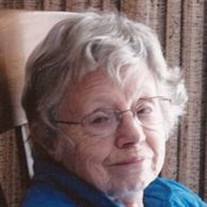 Cleophas Margaret Zeug, the daughter of Joseph and Cleophas (Schulte) Iffert, was born April 19, 1918, in Leavenworth, Minnesota. She received her formal education in Morgan Public Schools.

On September 28, 1940, Cleo married Leo Zeug at St. Michael’s Catholic Church in Morgan, and they made their home in Echo. In 1948, the family moved to Redwood Falls. Cleo was a homemaker. In her spare time, she enjoyed gardening, painting, sewing, knitting, and playing bridge.

Cleo was preceded in death by her husband Leo in November 1995; son David; and great-grandchildren Sara and Grady.

Blessed be her memory.
To order memorial trees or send flowers to the family in memory of Cleopha "Cleo" Zeug, please visit our flower store.