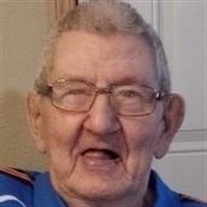 Cleon Aune, 90, of Redwood Falls died Wednesday, April 20, 2016 at his home. Funeral services will be held at 12 noon on Friday, April 22, 2016 from Birk Funeral Home in Hendricks with burial to follow in Calvary Lutheran Cemetery, Hendricks. Visitation will be held on Thursday, April 21, 2016, from 4 until 7 p.m., at Nelson-Hillestad Funeral Home in Redwood Falls. Visitation will continue at the funeral home in Hendricks on Friday from 11 until noon.

Cleon lived in Hendricks in his early years and moved to Redwood Falls in the early 1970s. He loved horses and enjoyed following sports – especially the Twins and Vikings. Cleon did a lot of craft projects; when he was 89 years old he began painting beautiful garden stones. He enjoyed coloring, painting and playing Bingo. Cleon had an infectious smile. He enjoyed visiting family and loved to tease the staff at his home.

He is survived by his sisters Delores Olson, Elizabeth Klosterman, and Joan Lovro; brother Paul Aune; many nieces and nephews; his housemates and many friends. Cleon was preceded in death by his parents; brothers Julian and James Aune; and sister Lorraine Thompson.

Blessed be his memory.
To order memorial trees or send flowers to the family in memory of Cleon Aune, please visit our flower store.