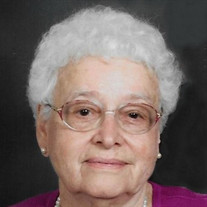 Clara Rosina (Job) Maisch was born on January 26, 1925, in McPherson County on a farm near Hosmer, SD. She was the daughter of John J. and Rosina (Giest) Job. Clara was baptized and later confirmed in the Reformed Church. She attended school in McPherson County until the eighth grade.

On January 1, 1944, Clara was united in marriage to Norman Maisch in the country church near Hosmer, SD. After they were married, they moved to Redwood Falls where they raised two children. They were married for 66 years before Norman passed away in December 2010. Clara moved to Johnson Park place for two years. Then because of failing health, she moved to Parkview Home in Belview, MN.

Clara was a wonderful woman who was a devoted wife and mother. For 13 years she worked as a cook at the Redwood School and for two years with Control Data. Other jobs were babysitting for the Burke Family, a waitress/cook for the Jolly Mill, and foreman for a machine crew detassling corn. In 1970 she was diagnosed with Leukemia which ended her working career. Family, friends and church were her life. She loved doing crafts such as knitting, crocheting, embroidery, sewing, quilting, and ceramics. Another favorite activity was playing cards. She always had a positive attitude and “can do” spirit to get things done. Her life lessons will be passed on for many generations and she will be missed by all who knew her.

Clara’s family would like to thank everyone for their prayers, love and support during this time of sorrow.

Blessed be her memory.
To order memorial trees or send flowers to the family in memory of Clara Maisch, please visit our flower store.