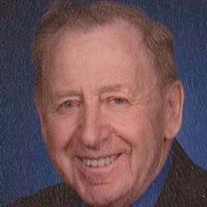 Chris M. Christensen, 90, of Morgan, died Saturday, May 27, 2017 in Seasons Hospice House in Redwood Falls. Funeral services will be held at 10:30 a.m. on Saturday, June 10, 2017 from St. Matthew’s Lutheran Church in Evan. Burial, with military honors, will follow in the Prairieville Cemetery, Prairieville Township, Brown County. Visitation will be held from 5 until 8 p.m. on Friday, June 9, 2017 in Nelson Hillestad Funeral Home in Morgan and will continue from 9:30 until 10:30 a.m. on Saturday at the church in Evan.

The family requests contributions be made to St. Matthew’s Music or Sunday School funds.

Christen Martinus Christensen, the son of Christen and Marian Tina (Jensen) Christensen, was born April 2, 1927 in St. Paul Park, Minnesota. He attended District 57 Country School in Eden Township through the eighth grade and graduated from Morgan High School in 1945. In 1945, Chris enlisted in the United States Navy and served on the USS Hornet, an air craft carrier. In 1950, he graduated from Gustavus Adolphus College with a teaching degree in mathematics and a minor in chemistry. He taught high school in Comfrey for one year and after that returned to Morgan to farm.

Chris served in many positions at St. Matthew’s Lutheran Church, including choir director, Sunday school teacher, and church council. He served on the Morgan Public School board, the Brown County REA Co-op board, was an active 4-H leader and was involved in the Lions, Farm Credit, and VFW organizations for many years. Chris enjoyed music, concerts and plays, Danish food, playing cards, reading, traveling, and spending time with family.

He was preceded in death by his parents, Chris and Tina; his wives Barbara and Ann; his son Christen; his brothers Jens Knutson and Milo Christensen; his sister Mildred Maas; and his special friend Deloris Lindley.

He will be remembered as a beloved husband, father, grandfather and great-grandfather. Blessed be his memory.
To order memorial trees or send flowers to the family in memory of Chris M. Christensen, please visit our flower store.