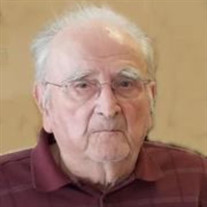 Charles Doidge, 95, of Redwood Falls, died Friday, October 9, 2020 at The Estates of Roseville, Roseville, MN. A Private Family Graveside Service was held Monday, October 12, 2020 at the Redwood Falls Cemetery. A Memorial Service for Charles will be held at a later date.

The Nelson-Hillestad Funeral Service of Redwood Falls is in charge of the arrangements. E-mail condolences may be sent to cindyLfolin@gmail.com or to the Doidge family, c/o Cindy Folin, 105 Cottage Downs, Hopkins, MN 55305. Memorials may be directed to Gloria Dei Lutheran Church, 301 N Lincoln St. Redwood Falls, MN 56283.

Charles John Doidge, the son of William C. and Lulu M. (Trouth) Doidge, was born August 16, 1925 in Prairieville Township, Brown County, Minnesota. He was raised in rural Sleepy Eye and attended elementary school in District 58 at Evan. Charles graduated from Sleepy Eye High School in 1943 and from Dana College, Blair, Nebraska in 1951. He received additional training at Creighton University and became a Certified Public Accountant (CPA) in 1960. Charles served in the United States Army in the Army Audit Agency in World War II (1946-1947) and during the Korean Conflict (1952-1954). He was stationed in San Antonio, Texas and Albuquerque, New Mexico.

On February 9, 1952, Charles married Vera Mae Nielsen in Blair, Nebraska and the couple lived in San Antonio and Albuquerque before moving their family to Omaha, Nebraska in 1954. They moved to Redwood Falls in 1956 where Charles was a self-employed CPA until his retirement in 1991. He was a member of Gloria Dei Lutheran Church where he served as a deacon, Sunday School superintendent and choir member. Charles belonged to the Minnesota CPA organization and the Rotary Club.

Charles’s faith formed the bedrock of his marriage of 57 years to wife Vera Mae and of the home they created in which they raised, nurtured and educated five children in the Lutheran church.
Charles centered his life on family and faith. He was a loving, gentle and dedicated father, grandfather and great grandfather. An outwardly reserved and quiet man, Charles was caring, generous, and sometimes downright silly among friends and family. Game night was a treasured family tradition.
Vacation travels created many happy and indelible memories. Springtime brought the Minnesota Fishing Opener and the near annual pilgrimage to Mill Lake for fishing and family. The times spent with family playing cards, and replaying the battle with the big one that got away, were priceless.
Charles enjoyed many hours in his extensive garden tending to a wide variety of vegetables and fruits and fending off mosquitos. A late bloomer as a golfer, Charles picked up a club for the first time at age 50 and took to the sport with a passion, logging many rounds at the Redwood Falls Golf Club each summer.
Charles is survived by his children: John Charles (Marlaine) Doidge of Wagner, SD; Deborah Ann (Duane) Meagher of Hot Springs Village, AR; Cynthia Louise (David) Folin of Hopkins, MN; Julie Kaye (Carl) Huetteman of West Lafayette, IN; and Jeffrey Lynn (Lisa Leach) Doidge of Austin, TX; 12 grandchildren and 9 great grandchildren. He was preceded in death by his parents and sister Lois V. Gammon, and his wife Vera Mae Doidge on March 21, 2009.

Blessed be his memory.
To order memorial trees or send flowers to the family in memory of Charles Doidge, please visit our flower store.