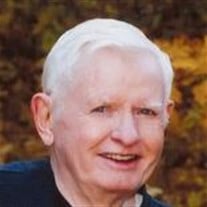 Charles “Chuck” Bruce, 84, of St. Peter and formerly of Redwood Falls, entered into the presence of the Lord on Monday, March 5, 2018 at his home. Funeral services will be held at 10:30 a.m. on Saturday, March 10, 2018 from Nelson-Hillestad Funeral Home in Redwood Falls. Burial, with military honors, will follow at the Redwood Falls Cemetery. Visitation will be held Friday, March 9, 2018, from 5 until 7 p.m., and will continue on Saturday, from 9:30 until 10:30 a.m., all at Nelson-Hillestad Funeral Home.

For the health and consideration of Chuck’s family, please refrain from using perfume, cologne or other scented products.

Charles Homer Bruce, the son of William and Vivian (Wood) Bruce, was born May 4, 1933 in DeKalb County, Illinois. He grew up in Earlville, Illinois where he received his elementary education. Chuck moved with his family to Paw Paw, Illinois in 1947 and graduated from high school there in 1951. He enlisted in the United States Air Force on January 30, 1952 and served as a radio operator with the 3906th Operations Squadron in French Morocco Africa. He was an air crew member there during the Korean War and flew throughout Europe, the Middle East, and Asia. Chuck was honorably discharged on December 7, 1955 and returned to the Chicago area.

On December 12, 1959, Chuck married Joyce L. Williams at the Wesleyan Methodist Church in Oak Park, Illinois. Chuck was employed as an air traffic controller with the Federal Aviation Administration (FAA) which facilitated the young family’s moves to Saulte Ste. Marie Michigan, the Marquette Michigan area, Lindenwood Illinois and Northway Alaska. One of Chuck’s fondest memories was the two years he and his family spent living and working in Alaska.

In 1972, Chuck, Joyce and their sons moved to Redwood Falls where the couple lived until relocating to St. Peter in 2009. Chuck was employed by the FAA as an air traffic controller for 34 years. In 1988 he retired from the FAA and began working part time in aviation weather at the Redwood Falls airport. He also worked for the John Deere dealership as a part-time maintenance man. Chuck fully retired in 2000 at the age of 67.

He was a charter member of the Redwood Alliance Church where he served as a greeter, did communion preparation and served communion to shut-ins. Chuck loved flying and had acquired his commercial pilot license with an instrument rating. He was a ham radio operator, primarily using Morse Code, and also enjoyed fishing, camping, gardening, woodworking and watching his grandson play sports.

Chuck will always be remembered for the love he had for his wife and children. He is survived by his wife, Joyce, of St. Peter; son Rodney (Cindy) Bruce of St. Peter; foster son Sam (Lisa) Bear of McMinnville, Oregon; granddaughters Catherine (Matthew) Beenham, Savanna (Chad) Brown, and Gretchen Bear; grandsons Cullen Bruce, and Joshua (Alysha) Bear; and great-granddaughters Kyleigh, Cayden, and Quinnley Bear. Also surviving are his sisters Luella (Jack) Keyes of Englewood, Colorado, Margie (Jim) Rafferty of Hendersonville, North Carolina, and Juanita Hatcher of St. Paul. Chuck was preceded in death by his son William Bruce in 2006; brothers Bobby, Billy, and Benjamin Bruce; and sister Marylee Rosenkrans.

Blessed be his memory.
To order memorial trees or send flowers to the family in memory of Charles "Chuck" Bruce, please visit our flower store.