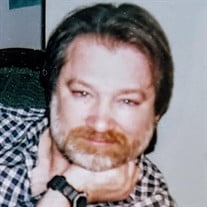 Charles “Chip” Coffin, 61, of Lakeville died Saturday, December 18, 2021 at Fairview Ridges Hospital in Burnsville. A private family funeral service will be held at Mt. Zion Church in Bemidji with burial to follow in Calvary Cemetery. A celebration of life will be held in the Spring of 2022.

Charles Flint Coffin, known as "Chip", passed away on December 18 at age 61. Born in Bemidji, Minnesota, on June 15, 1960, he was an insightful, gentle, creative soul who enjoyed the simple things in life. He grew up in the country and had a lifelong love of nature and animals. He enjoyed drawing and writing stories since he was a boy. He and his brother Rocky spent many happy and contented hours imagining, talking, and laughing about the characters they developed for their stories and laughing about the absurdities of life.

By the time he was a teenager, he had become a philosophical fisherman. On his many solitary walks to the back 40, he never felt alone and developed a rich inner life. His deep, quiet faith was absent of religiosity and remained unshakeable throughout his life.

In 1980, Chip graduated from Bemidji High School, completed the Accounting program at St. Cloud vocational school, and graduated with a degree in Social Work from Bemidji State University in 1984. While attending BSU, he made lifelong friends and met Cindy Adams, his companion and best friend during the 38 years they had together. The happiest days of his life were their wedding day and the day their daughter Ginifer was born.

For the past 28 years, he was a mechanic for the US Postal Service. He was known as a dedicated, hard worker, who signed his worksheet every night with a little drawing instead of his name. As an adult, Chip was a thoughtful, intellectual person who could carry a conversation with anyone on any subject. He had an uncanny ability to give excellent advice, no matter what the problem was. Throughout the years, the advice he gave his daughter most often was "Ginifer, don't get old." He also said that the two best things in life were happy kids and happy dogs.

Chip had a strong heart for the downtrodden, those who were powerless, and people who were passed by in society. The worth he saw in people did not come from their wealth, achievements, status or position in society, but by the knowledge of an individual's worth as a human being.

He was preceded in death by his grandparents, Charles and Blanche (Randall) Coffin, Miles and Millicent (Owen) Evans.

In loving memory.
To order memorial trees or send flowers to the family in memory of Charles "Chip" Coffin, please visit our flower store.