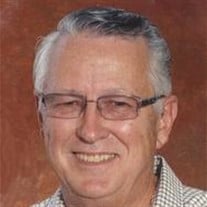 Casper Dennis Green, the son of Herbert and Alice (McNamara) Green, was born May 22, 1941 in Redwood Falls. He grew up on the family farm in rural Morgan, where he resided his entire life. Cap received his formal education at St. Michael’s Catholic School and Morgan High School. He graduated in 1959 and then attended trade school for welding. Cap was a life-long farmer; he retired in 2004.

Cap was married to Virginia Maurice in Morgan. On February 24, 2013, Cap married Karon Roesner in Texas and they made their home on the farm near Morgan. Cap was a member of the Army National Guard from 1962 until 1968 and was stationed at Fort Polk, Louisiana. He belonged to the Wingnuts remote control aircraft club, the Academy of Model Aeronautics, the Cattlemen’s Association, and the Morgan Township Board. Cap was a member of St. Catherine’s Catholic Church and the Knights of Columbus.

Blessed be his memory.
To order memorial trees or send flowers to the family in memory of Casper "Cap" Dennis Green, please visit our flower store.