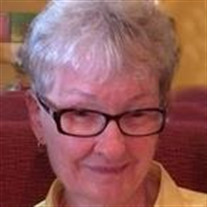 The family prefers memorials be directed to Season’s in Redwood Falls or Hope Lodge in Rochester.

Carol Jean Dolezal, the daughter of Roy and Jean (Stitz) Schmitz, was born May 8, 1938 in Seaforth, Minnesota. Carol grew up in rural Delhi and Belview, graduating from Belview High School in May 1956.

On June 23, 1956, Carol married Daniel Dolezal. They made their home in the Olivia area, later moving to Loretto and Minneapolis before settling in Morgan. Carol was first and foremost a wonderful mother to her five children. She and Dan owned and operated the Morgan Bowling Alley; later Carol worked for Control Data/Zytec/Artysen. After 20 years of employment with Artysen, Carol retired in June 2006.

Carol was able to be very active following Dan’s death. She found such joy being involved in Bone Builders, New Horizons, card club, coffee time with friends, Birthday Club, and more. She was a Banana BINGO volunteer at Gil-Mor Manor. Carol was a member of St. Michael’s Catholic Church in Morgan. Church was important in Carol’s life; if they needed a volunteer, she was there. She had a kind heart and judged no one. Carol talked to everyone and made sure that her children did the same. She loved to dance and sing – Carol and Dan could really “cut a rug” together. Carol loved to eat, but didn’t necessarily like to cook. Her Christmas Eve soup and dressing (with gizzards) were a family favorite. Special K bars were her specialty – family fights were known to break out over them. (And you had better use real Special K and chunky peanut butter!)

Carol was an avid reader of all types of books. She LOVED following the Minnesota Twins. It didn’t matter if they were winning or losing – she watched every game to the end. Carol was a hands-on grandma and great-grandma. She went to their events and hung their pictures and art on her refrigerator. Carol made sure each grandchild and great-grandchild felt special.

Blessed be her memory.
To order memorial trees or send flowers to the family in memory of Carol Dolezal, please visit our flower store.