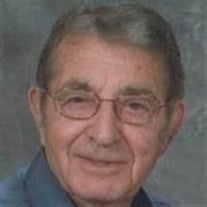 Arrangements are pending with Nelson-Martin Funeral Service of Redwood Falls. E-mail condolences may be sent via www.nelsonmartinfuneralservice.com .

Burton Lyle Moore, the son of Charles Burton and Mildred (McIlgargey) Moore, was born February 16, 1925 in Villard, Minnesota. He grew up in the Villard area and received his formal education in Breckenridge Public School. Burt farmed with his father until he was 22 years old. When father passed away and the farm was sold, Burt attended Minneapolis Business College and earned an associate’s degree in Sales and Accounting.

On May 28, 1949, Burt married Colleen Joy Hanson in Fergus Falls. He entered the United States Army in 1949 and served until his honorable discharge in 1951 with the rank of Corporal. Burt and Colleen moved to Minneapolis where he was a sales representative and territory manager for Barker-Letz Company farm equipment, Cargill Seed Corn Company, Burkhardt-Larson Company and Short-line Farm Equipment products. The family then moved to Redwood Falls where he established and managed Burt Moore Sales, Inc., buying from manufacturers and selling to distributors in the United States and Canada. Following his retirement from full-time work, Burt worked part-time for West Central Chemical Company in Willmar and Tersteegs in Redwood Falls.

He was a member of First United Methodist Church in Redwood Falls where he served as an usher and on the church board. Burt also belonged to the American Legion and the Redwood Falls and Willmar golf clubs. He enjoyed gardening, church activities, golfing, and racquet ball.

Burt is survived by his wife, Colleen “Coke” of Redwood Falls; sons Bradley Charles (Carolyn Borow Moore) Moore of Mendota Heights, and Richard Lee “Dick” Moore of Willmar; grandchildren Satchel Borow Moore and Harper Borow Moore; and sisters Patricia Nelson of North Branch, and Darleen Johnson of Portland, Oregon. He was preceded in death by his parents; and his sisters Mary Caspers; Betty Southerton; and a sister, Doris, in infancy.

Blessed be his memory.
To order memorial trees or send flowers to the family in memory of Burton Lyle Moore, please visit our flower store.