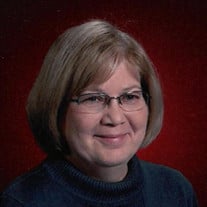 Bonnie was born on September 30, 1954 in Sleepy Eye, MN to Frederick and Gloria (Schou) Gegner. She grew up on a farm near Morgan where she loved taking care of numerous baby chicks and kittens. She graduated from Morgan Public School in 1973. During high school, Bonnie began dating Rex Welter, they were united in marriage on April 20, 1974. Bonnie and Rex had three children, Scott, Joy and Cory.

Bonnie worked for Norwest Bank, Bonnie’s Day Care, Morgan Industries and she most recently worked at F&M Bank of Morgan for 26 years before retiring. Bonnie served as a Sunday School teacher, Girl Scout Leader and Cookie Mom, and on the Civic and Commerce Board. Her favorite activity was being a part of the Morgan Community Players, which she took part of for 13 years.

Bonnie appreciated family gatherings and spending precious moments with her kids and grandchildren. She enjoyed playing piano, playing cards and watching the Minnesota Twins and Vikings. She was an avid reader, always excited to start a new story. Bonnie also thoroughly enjoyed any time she was able to spend at the lake, fishing with her “gold hook”, feeding the chipmunks out of her hand, watching the birds, and enjoying the sunsets on the lake. Being at the lake was her time to relax and appreciate the beauty around her.

She is survived by her husband Rex of 47 years, her three children Scott (Andrea), Joy (Bill), Cory (Nicole) and 10 grandchildren: Lauren, Jaylyn & Ray Welter; Damian, Garret, Mikala, Jasmyn and Peyton Wiese; and Cadence and Cassidy Welter. She is also survived by her mother Gloria Gegner, sister Darla (Brian) Sams, sister-in-law Kim (Joe) Scanlan, nieces and nephews and many dear friends. She was preceded in death by her father Frederick, brothers Randy and Kevin, and mother- and father-in-law Delrose and Melvin Welter.
Blessed be her memory.


Blessed be her memory.
To order memorial trees or send flowers to the family in memory of Bonnie R Welter, please visit our flower store.