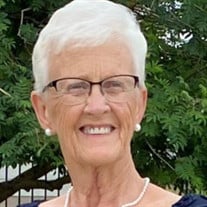 Bonita “Bonnie” Leopold, age 76, passed away after her battle with Pulmonary Aspergillosis on Saturday, September 3, 2022 at her home in Redwood Falls surrounded by her loving family. A Funeral Service will be held at 11:00 a.m. on Thursday, September 8, 2022 at Zion Evangelical Lutheran Church in Morgan. Visitation will be held from 4:00 until 7:00 p.m. on Wednesday, September 7, 2022 Zion Evangelical Lutheran Church in Morgan. Visitation will continue from 10:00 until 11:00 a.m. on Thursday, September 8, 2022 at Zion Evangelical Lutheran Church. Burial will be a private graveside in Zion Eden Lutheran Cemetery.
Arrangements are with Nelson-Hillestad Funeral and Cremation Service of Redwood Falls. Condolences may be sent via www.nelson-hillestad.com .
Bonita Faye (Ness) Leopold was born September 9, 1945 in Red Wing, Minnesota to Myron and Geneva (Gluesen) Ness. She was confirmed at 14 years old at Gloria Dei Lutheran Church in Redwood Falls. On November 17, 1961 she married John Dennis Kretsch and that union gave her four daughters. On September 14, 1996 she married Rodney Leopold in Morgan, Minnesota and they made their home in Redwood Falls. Bonnie was a member of Zion Lutheran Church in Morgan and attended King of Kings in Apache Junction, Arizona. She was an honorary auxiliary member, and she volunteered at Friends of Gilfillan making ice cream for FarmFest. Bonnie enjoyed farming, riding horse, bowling league, making creative jewelry, canning everything, exploring the desert, riding on the razor, hosting all holiday get togethers. She was an excellent cook, loved going to the lake, and camping, particularly at Old Wagon Campground in New London with any family that could join. Bonnie was known for her infectious laugh!
She is survived by her husband Rodney Leopold; daughters, Camey Graham, Kim (Greg) Malecek, Carmen Prodoehl (Ron Melby), Colleen Serbus (David Hansen); step-children, Lori Schoening, Tharan (Ruth) Leopold; 15 grandchildren and 9 great-grandchildren.
Bonnie was preceded in death by her parents; two brothers, Vincent Ness and David Ness; infant sister; and son in law, Todd Serbus.
To order memorial trees or send flowers to the family in memory of Bonita "Bonnie" Leopold, please visit our flower store.