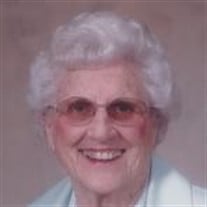 Blanche “Nook” Brewster, 95-1/2 of Redwood Falls and formerly of Sanborn died Friday, August 8, 2014 at Redwood Area Hospital. Funeral services will be held at 10:30 a.m. on Tuesday, August, 12, 2014 from Gloria Dei Lutheran Church with burial to follow in Sanborn City Cemetery. Visitation will be held Monday, August 11, 2014, from 4 until 8 p.m., at Nelson-Martin Funeral Home in Redwood Falls and will continue at the church on Tuesday for one hour prior to services.

Blanche Brewster, the daughter of Edward and Annie (Reese) Spielman, was born January 8, 1919 in Windom. She graduated Windom High School in 1937. After high school, Nook attended Mankato School of Beauty Culture and worked for Fran Numendahl in her beauty shop. After a year and a half, Nook began employment for Northwestern Bell Telephone Company as an operator and commercial clerk.

On March 8, 1947, Nook married Morris Brewster in Windom. Morris owned and operated Brewster Service and Sanborn Oil Company at Sanborn Corner. That was Nook’s only move until she relocated to Redwood Falls in 1997.

Nook enjoyed music, poetry, and dancing. She liked all sports – especially golf. Nook belonged to many social clubs, including “Linger-Longer” Club in Sanborn, Sanborn Craft & Study, Bridge, 500, Pinochle, and numerous card clubs in Redwood Falls. Being a friend to everyone was her concern.

Nook is survived by her children Beth Ann (Wayne) Krueger of Park Rapids, and Bradley (Brenda) Brewster of Burnsville; grandchildren Marcel (Corey) Krueger, Bailey Brewster, Brianne Brewster, and Brycelyn Brewster; great-grandchildren Easton and Holden Krueger; and several nieces and nephews. She was preceded in death by her husband Morris in 1983; infant daughter Bari Lyn in 1952; two brothers; and five sisters.

Blessed be her memory.
To order memorial trees or send flowers to the family in memory of Blanche "Nook" Brewster, please visit our flower store.