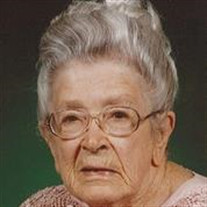 Bessie Ellen Smith, the daughter of George and Bessie (Bauer) Whittet, was born November 20, 1911 in Delhi Township, Redwood County. She grew up in rural Redwood Falls and graduated from Redwood Falls High School in 1930.

On September 23, 1934, Bessie and Grant Smith drove to South Dakota to get married. They lived and farmed along the Minnesota River in Flora Township, Renville County. Grant passed away in 1991 and Bessie continued to live on their farm until moving into Garnette Gardens, Redwood Falls, in 2008. Bessie was a member of the Middle Creek United Methodist Church and served as a 4-H leader while her children were growing up. Bessie enjoyed exhibiting baked goods and handwork at the county fair where she earned many champion ribbons as well as recognition of being the oldest exhibitor.

Blessed be her memory.
To order memorial trees or send flowers to the family in memory of Bessie Smith, please visit our flower store.